Free, but bookings are essential

Chamber Made Opera is passionate about expanding people’s notions of opera, and demonstrating ways in which contemporary performance can change the way one thinks. The Kensington Adventure Playground, known as The Venny, provides children and their families from the local area, including many from nearby Public Housing, with a communal backyard. It’s a safe place for children to play, learn and hang out together.

2014 was the third year that Chamber Made Opera have collaborated with the children of The Venny. In 2012, there was Lost and Found, a music theatre adventure inspired by the children’s lives, and in 2013, there was From Here To There developed around the theme of ‘journeys’.

In 2014, our Artistic Associates Sarah Kriegler and Christie Stott, along with Danni von der Borch and Enio Pozzebon, worked with the children on a weekly basis to devise and create a series of short silent films. Stories from the Suitcase had a public screening on Friday 21st November, accompanied live by the children performing the film’s score and foley soundtrack.

The Venny Project in 2014 was supported by The Hugh Williamson Foundation and the Australian Government through the Australia Council for the Arts, its arts funding and advisory body.

Chamber Made Opera is assisted by the Victorian Government through Arts Victoria and the City of Melbourne. 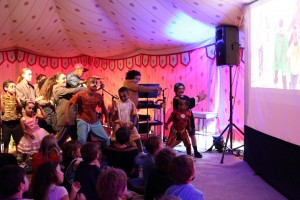 For more images from this event, please see our album on Flickr.

The Venny and Chamber Made Opera team