One-off presentations of findings and ideas in development that emerge from Little Operations, our research and development stream.

EVEN! was a restaging of a site-specific in-ear score for 100 interpreters with unknown guests and 6 year old performers. Postured as choreographic, conversational, academic, critical, historical, musical, it represents the careers of Sydney based composers James Brown, Austin Buckett, Lachlan Hughes, and Marcus Whale in a dense aggregation of dialogues. It is part of a gesamtkunstwerk about suspension commissioned by Sydney’s Carriageworks, a total artwork on the culture of genius, on gender, potential, and economy. Presented as the first of Chamber Made Opera’s Little Operations series, EVEN! entered Deakin Edge wary of power systems, as a work that isolates the idea of collaboration or dependence.

Ivan Cheng is a Sydney based artist whose practice focuses on the damage in interpreting notation. With foundations in contemporary music performance, Cheng’s practice is score-based, manifesting in staged performances accompanied with texts, publications, workshops, lecture performances, objects, and video. He exploits the friction between individual performers and score – what isn’t notated, missing information, stylistic expectation, and different types of virtuosity.

He has been commissioned by Sydney’s Carriageworks to create a new work over three years, a proposed multi-day gesamtkunstwerk (total artwork) titled epoche-lacan-orbits. This followed an invitation to creative development at Carriageworks in 2012. In 2012 Ivan was a mentee in the Australia Council’s JUMP mentoring program, mentored by Nigel Kellaway. He was invited to be a resident at Robert Wilson’s Watermill Center Summer Program (NY) in 2012, 2013, and 2014, and has since also developed work with collaborators during the year round residency program.

EVEN! was Ivan’s Melbourne premiere.

This event was co-presented by Chamber Made Opera with the Fed Square Creative Program. 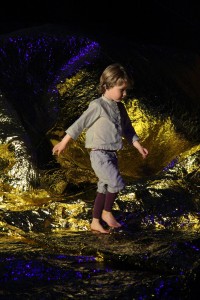